This year we have seen the #barefaceselfie photos all over the internet raising awareness and money for cancer.

Love your feet or hate them, this is to raise awareness of some 60 million people in the world who go without the most basic item of clothing everyday – shoes. In the UK alone, we throw away 2 million pairs of shoes every week! Shoe Aid was founded by Lee Todd who was moved to take action after seeing footage of the Boxing Day Tsunami in 2004 where people had lost everything. His charity now collect unwanted pairs of shoes and send them to places they are needed.

In a bid to raise awareness of this problem, Shoe Aid want to see snaps of your bare feet with the hashtag barefootselfie. Many celebrities, presenters, politicians and authors have jumped on board bearing their tootsies to the world!

This also coincides with The Barefoot Walk in Nottingham which will take place on the 7th September in Wollaton Park. It is in its third year and this year they hope to break a world record if 7,050 people join the event. Money for the charity is raised through registration to walk and people can then raise money themselves for their own charities, so that smaller organisations can benefit too.

So, what are you waiting for? Throw off the socks, go naked and join me by posting your #barefootselfie here or on our Facebook page 🙂

I look forward to seeing your pinkies! 🙂

and The Aromatree Company Team 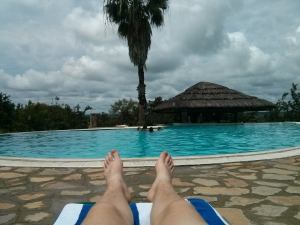